You are here: Home / character / Why True Champions are “Sissies” 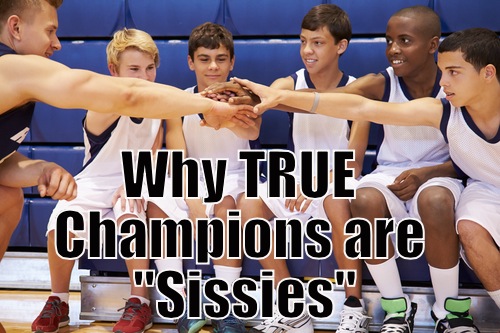 Champions are tough. They fight hard, play hard, work till they get it right and then keep working some more.

Champions don’t back down and they are aggressive against opponents.

And true champions are “sissies”.

At least that’s what other competitors may call them when they show compassion towards teammates and opponents. But the honest truth is that showing compassion when others around you aren’t,  shows strength of character and is definitely not a sign of weakness.

If your child is learning mad skills, but does not have a clue about the importance of compassion in youth sports, then all his talent is basically a bunch of athletic bluster. A lot of noise without any substance.

Don’t let your child grow up to be a grandstander that only cares about his or her own performance. Make sure he or she is learning that compassion in youth sports is in the DNA of a true champion.

If your child exhibits these behaviors when he plays sports, then he understands what competitive compassion is all about; who cares if others label him a “sissy” or wimp?

Compassion knows when to flip the switch.

Yes, it may be a tight game, or perhaps a championship is on the line, but when an opponent gets hurt, a true champion never gloats or brags about how he “took the guy out.” A true champion knows how to flip the switch from giving 100% and going all out against an opponent to being concerned that someone got hurt, even if she doesn’t know the person.

Compassionate competitors don’t try to injure or “take out” opponents; they want to win and they give it their all, but not with cheap shots. And when the competition ends, so does the opposition.

Compassion Doesn’t Ignore Those Who are Troubled

A true champion doesn’t hide his compassionate side when someone is troubled. He is understanding and caring when about the feelings of others, even if he doesn’t know them.

In a society where kids are pushed to fight for what they want–and in youth sports that is exactly what they need to do–we cannot forget the importance of teaching them not to run over or ignore others in the process. If a teammate is sad or struggling with something, encourage your child to reach out to that person, offering a listening ear and an encouraging word. Compassion means wanting to help, even if all you can do it listen and say kind words.

In the heat of competition, it is way too easy to blame someone for a disappointing loss.

I’ll never forget one time when my husband was coaching high school softball and it came down to the last inning, with our team ahead by one and one out remaining. A fly ball was hit to center and a routine catch would have meant a win for our team. But the girl dropped the ball, the team scored and as a result, we lost the game. That player was upset and crying after the game and I know that it would have been easy for the girls to put the blame for the loss on her. But my husband would not let the players start the blame game.

Playing the blame game never resolves issues and never helps players improve. It is a feeble attempt to soothe frustration. Whether it’s parents or teammates or even coaches who start blaming, it is a useless exercise. It is best to acknowledge that a mistake was made, figure out how to fix the mistake, forgive the mistake, and move forward.

Compassion remembers that everyone makes mistakes, and looks to forgive and put it behind.

Compassion Knows How To be a Friend

When my son was in 5th grade, a new kid came to his school. Nick played sports and so my son found a common interest with him. My son was the first kid to befriend Nick and make him feel welcome. I’ll never forget hearing his mom tell me that and the pride I felt that my son had the compassion to know how to be a friend.

But compassion knows how to be a friend. It knows how to listen, how to ask questions, how to invest in relationships with people. It knows that friendship is a two-way street.  You must be a friend to have friends, as the old saying goes.

A true champion does not depend on the popularity resulting from accolades or awards to dictate friendships. It seeks friends out and works on those relationships to make them meaningful and lasting.

True Champions Know How to Be Compassionate

In an effort to motivate kids to work hard and “toughen up,” let’s remember that toughness, aggression, and 100% effort are not the opposite of compassion. True champions understand that Toughness and Compassion can play on the same team.

Back in April, I started a series on 52 Virtues. I got sidetracked with some other projects, but I’m back with virtue #5: Compassion.  If you’d like to get caught up, here’s the other three on Assertiveness, Caring, Cleanliness, and Commitment.

Nominate a coach, volunteer, or parent for the October Positive Youth Sports Award! 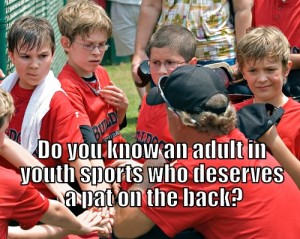 Take just a minute and nominate someone now!