You are here: Home / coaches / One Question That Will Help Your Child Compete Better 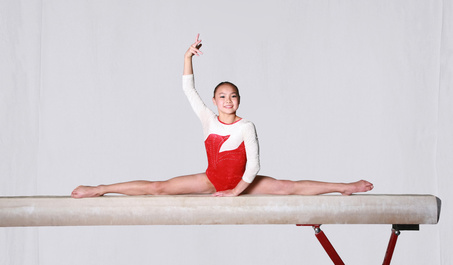 Are you looking for answers on how to help your child compete better? Maybe you’ve spent a lot of time and money teaching her skills, but she can’t seem to perform consistently.

I’m not a trained expert, but I’ve been a mom for 29 years and a sports mom for 22 and I’ve seen my kids fight the battle in their minds over and over. I believe that moms and dads can take the first step towards helping their children with the mental game by recognizing that sometimes an athlete enters the game already behind the eight ball because he’s asked himself the wrong question.

and in it the author explains that switching questions can make a huge difference in performance and results. He tells the story of his daughter Kelly, an avid gymnast who was training for a national championship competition in college.

During training Kelly would perform quite well most of the time, but only most of the time. I knew she’d never make the team that way. She had the ability, but her performance was too erratic.

So, on her request, we worked with Kelly so she could make the improvement she needed to make the team. First, we asked her what she thought about just before a performance. She discovered that in those crucial moments she always asked just one basic question: “Will I fall this time?”

That negative question interfered with Kelly’s performance because it focused her attention on falling and failing. So we worked on helping her switch her question. The new question  was Kelly’s own idea: “How can I do a great job?”

That did the trick. Using that new question, she reprogrammed herself by directing her attention in a positive direction. Her performance improved exponentially and also become highly predictable. Kelly says that new question helped her stay in the zone.

Not only did Kelly make the team, she came home with a trophy.

It’s hard to believe that such a simple change could make such a big difference. But that’s the hold that negativity has over us. Thinking negatively and asking negative questions can result in a performance that does not reflect the skill that your child has.

And in the same way, positive thinking and positive questioning have a visible impact because they can enhance the ability your child has.

If you know your child has the skill and yet still seems to perform inconsistently, help him figure out what questions he’s asking before he plays. Then let her come up with a positive question to ask herself instead.

When you try this switch for a period of time, let me know what differences you see in your child’s performance.  Remember, that the mind is powerful; inevitably what your child thinks is what they will become.

Are you struggling with a specific problem in your parenting? Do you feel like you’ve hit a wall and just don’t know how to move forward with a certain issue?

I believe so strongly in the value of life coaching (I’ve been coached many times myself) that I will give you your first two sessions for only $25 each, over 50% off the usual hourly rate. Contact me at sportsparents@rcfamilies.com and mention the code: one question.

I look forward to hearing from you!

This post contains an affiliate link. But the honest truth is that I started reading this book because I’m a life coach and am all about questions, and only put the affiliate link in as an afterthought. This book is already changing my outlook, and my questioning.