You are here: Home / coaches / How to Respect a Coach That You Don’t Respect 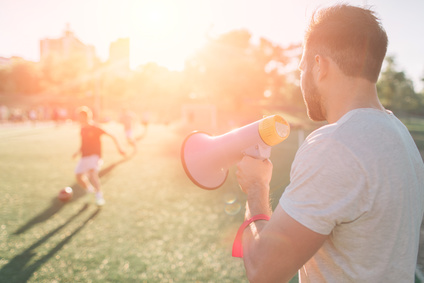 Has your child ever struggled with how to respect a coach that’s hard to like?

Has this ever happened to you? Your child plays on a team with a coach that, for whatever reason, you just can’t respect. You are frustrated with him or her, and your frustration rubs off on your child. The end result? Both of you are now left feeling anything but respect for the coach, and suddenly the season seems very, very long.

In 22 years of being a sports mom, my kids went through dozens and dozens of coaches. Some were instantly easy to respect, some grew on me, and some I had no respect for at all.

To be fair, most of my kids coaches deserved the respect they got. But there were a few along the way that really really tested my patience. And let me insert here that if the coach is doing something that jeopardizes the safety of the players or exhibits immoral behavior, the issue goes way beyond respect. These problems should be confronted and dealt with immediately.

When you run into a coach whose hard to respect–and you will if your child plays sports for awhile–how can you teach your child to respect adults and authority when the person in that position doesn’t act in a way that you think deserves respect?

I remember a coach that one of my kids had who truly tested us in this. He was a poor communicator, favored players, managed his bench poorly, and seemed to care more about winning than growing up leaders.  But he’d been around so long that the school just let him be.

Our child came home frustrated and ready to quit because of the coach. However, quitting was not what they wanted either, so we were left with the question of how to get along with, and better yet, how to respect–because it’s hard to learn from someone you can’t respect–a coach that you don’t respect.

When kids don’t like a teacher or coach, it’s easy to avoid them. But shying away will not help the situation. Encourage your child to talk to the coach, ask questions, offer to help before and after practice. These actions can help build rapport between your child and coach.

This was the mantra in our household. The whole phrase from Stephen Covey, author of 7 Habits of Highly Effective People, goes like this: Seek to understand, then to be understood.

We are usually so wrapped up in our own problems and wanting to be understood before we understand, that we forget that others are struggling too. Maybe the coach is tired because he or she has problems at home or doesn’t feel well or is facing stress at work.

The coach I referred to earlier in this post was divorced and seemed, to me at least, to be lonely. That could have been at the root of a lot of his personality problems.

Of course, this never excuses bad behavior, but it can shed light on why someone may be difficult to respect.

When teaching your children to “seek to understand”, you can simply guide them to realize that there’s usually more to the story than meets the eye and that there’s always a reason that people act the way they do. And once your child seeks to understand others, they will have an easier time being understood in return.

The verb Respect is a choice, not a feeling. This is an important distinction to make in the youth sports world when emotions are so intertwined with all that goes on. You don’t FEEL respect, and that’s OK, but you can still CHOOSE to respect.

As a sports parent who is trying to give your kids a positive and growing experience, are you running into this respect problem? I can help coach you to a resolution that will help you and your child have less stress and more fun. Learn more here.