You are here: Home / coaches / Top 5 Youth Sports Injuries,Part 4: Female Concussions and 3 Facts You Should Know 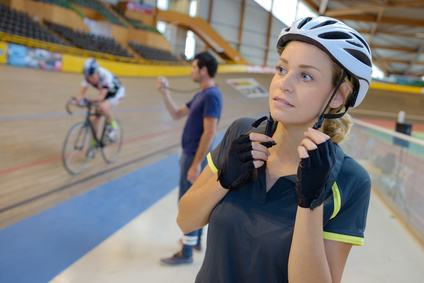 This week, Female Concussions is the fourth injury in a 5-part series on youth sports injuries, sponsored by the UHealth Sports Medicine Institute, part of the University of Miami health system. UHealth is paying me for these posts because they believe strongly in the importance of a safe youth sports experience for every young athlete.

In the midst of the discussions, football is always seen as the main culprit, when in fact there’s many other ways for athletes to suffer from head injuries.  In fact, according to a recent UHealth article, research increasingly shows that girls who participate in athletics also run the risk of suffering from traumatic brain injuries.

If you have a daughter who plays sports–and it doesn’t happen to be tackle football–don’t assume that she’s safe from head injury. It’s important for you to know these three facts about your daughter and sports concussions.

Girls are More Likely to Get Concussions that Boys

What? That’s what I thought when I first read that. How can that be? Isn’t football the biggest offender when it comes to concussions?

Listen to this statement from Uhealth:

One analysis of college athletic injuries, found that female softball, basketball and soccer players experienced concussions at a higher rate — sometimes as much as twice the rate — than their male counterparts. And taking all sports into account, female ice hockey players reported the highest rate of concussions, more than male football players, or nearly three times the rate experienced in football.

And the reason is not that boys’ heads are harder!  The explanation lies in the anatomy. “Girls neck strength is far weaker and can’t absorb shock as well,” explains Dr. Michael E. Hoffer, a mild traumatic brain injury expert at the University of Miami Health System. “That’s just how we’re built.”

Scientific research reveals that the female and male brains differ greatly in structure, activity, chemistry, and blood flow. It should make sense then that damage to the brain can affect women and men differently.

Girls’ Concussions are Likely to Last Longer than Boys’

UHealth’s research on girls’ concussions concludes this: A new study in the Journal of the American Osteopathic Association confirmed a long-held suspicion: adolescent female athletes tend to suffer concussion symptoms twice as long as their male counterparts. Typically it may take them twice as long to recover, a considerable difference.

According to the website Pink Concussions, the medical community has not yet established female-specific protocol, care plans or education resources for women with concussions. Therefore, females are more likely to judge their symptom pattern and length of recovery on what is normal for a male.

The result of this is that a patient may doubt herself when the speed of her recovery or the severity of her symptoms do not match the male experience she knows. Family members, school staff or employers as judge her experience to be abnormal, malingering or view there maybe other non-brain injury issues at play. Without proper education of patient, family and community supports, women and girls with brain injury including concussion, can experience an additional lack of support, doubt, isolation and anxiety beyond that which comes with brain injury. (PinkConcussions.com)

The bottom line here is that coaches and parents should not assume the same standard of recovery on female concussion sufferers as they do on male. In some cases, it may take them twice as long to recover.

Concussions Can Occur Where You Least Expect Them

Last week, I was talking with a high school girl attending our church youth group who had recently been in the hospital for a concussion. I asked her how she got it, expecting to hear that she played soccer, hockey or basketball. But this beautiful young lady got her head injury dancing! A member of her schools’ dance team, she fell during practice and sadly reported to me that she was out for a few weeks and would miss participating in the dance routine at homecoming.

Who would have thought you could get a concussion by dancing? The moral of the story is this: your child can get a concussion in any sport–ranging from football to wrestling to soccer to gymnastics–and in a multitude of activities: dancing, horseback riding, ice skating, playing on the playground, car accidents–the list is endless.

Concussions can occur where you might least expect them. This should encourage all parents–not just football parents–to know the symptoms and signs of a concussion so that you can quickly help your child get the treatment they need.