You are here: Home / coaches / When Coach Makes Quitting Seem Like Your Child’s Only Option: Has it Ever Happened in Your Family? 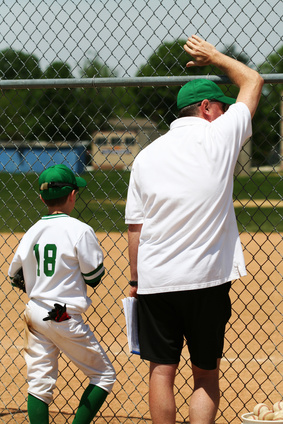 Has your child ever felt like quitting was their only option because they had a coach that you or they struggled to agree with? Maybe it was his demeanor, the way she ran practice, his playing time philosophy, or her game plan?

One coach stands out amongst the many coaches my kids had over the years of playing sports. He was a high school coach and quite honestly, there was nothing I liked about him as a coach. I didn’t like the way he treated the players. I didn’t like his game plan strategy because he overworked a chosen few on the team and basically ignored the rest. He was a poor communicator to players and parents. He thought nothing of cussing at the players.
Since he was the school’s coach, our options were limited. I suppose we could have pulled our son out and sent him to another school. We could have pulled him out and let him focus only on travel ball.
But the three of us–Dad, son, and I–agreed to stick it out for a number of reasons.
First of all, sending him to another school was simply not practical. We lived 5 minutes from the school, his friends were all there, and it was the school where my husband taught and coached.
Besides the impracticality of pulling him out, we thought long and hard about the implications. Here’s what we concluded: Quitting or “Moving On” sends messages that you may want to think twice about sending.
What are those message?

I understand that there are exceptions to this rule and that every situation is unique, but I wonder, are you allowing your child to quit or move on every time things get hard or uncomfortable?

I saw this happen over and over and over again with other athletes that my kids played with. The problem is that this type of behavior becomes a way of life for may kids and carries over into their adult life. They may have only gone from coach to coach, from team to team, as a young athlete, but as an adult, they continue by going from job to job, from relationship to relationship.

Don’t let your kids fall into this habit! It will encourage a lack of commitment and impact who they become as adults.

My son’s decision to stick it out with this coach was probably one of the reasons he was able to stick it out later in life with an overbearing employer for longer than he would have liked.  He eventually did move on, but it was not at the first sign of trouble.

The Message that the Grass is Greener Somewhere Else

Along the same lines as the first message is the idea that moving on to another team and coach is OK because it’s got to better somewhere else.

The grass may indeed look greener from afar, but I promise you that once you are on that field, you will see just as many weeds and brown spots as you saw on your own field.

Yes, there may be a better coach somewhere else, and in my son’s case, there was better coaches elsewhere. But a better coach does not necessarily mean that the whole situation will be better. No team, school, travel league, or coach is perfect. PERIOD. There will always be something to dislike in every situation your child faces.

One More Lesson Your Child Can Learn

Help your child learn how to get along and work with difficult coaches. This is another lesson that will help them later on in life. The tendency to hightail it out of there when people are hard to deal with will poison all areas of your child’s adult life–work, family, friendships.

These lessons of not quitting and bailing out of hard situations are the valuable nuggets that your child needs to really soar later in life. Don’t give in to the temptation to let your child run and hide. This will never help them become the strong, independent adult you want them to be.

If your child is struggling with a difficult coach, and you are not sure how to help them, I’m a life coach for sports parents and would love to help. Schedule a free introductory coaching session with me here.