You are here: Home / coaches / The Game When My Son Struck out 3 Times, and What I Learned 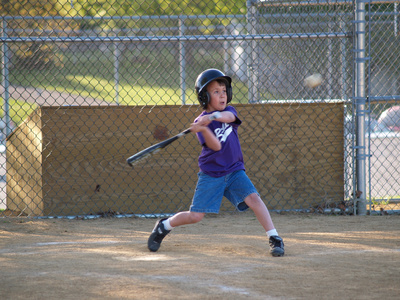 There are moments in a sports parent’s life that are embedded in your heart and memory so deeply that they will always move you when you think of them.

One of those moments for me was when my 4th-grade son–who is now 28–struck out three times in a playoff little league game.

As the game progressed, I sat calmly in the stands and watched him pitch competently, yet fail to have any success at the plate.

His first time up, he struck out.

His second time up, he struck out.

His third time up, he struck out.

Each time, he would slump back to the dugout, the tears coming closer and closer to the surface until they finally erupted after his third strikeout.

By this time, I had gotten up off the bleachers and was walking around behind them, not wanting to look and aching to do something to comfort him. However, I knew that he needed to work through this tough game without his mom coming into the dugout and making a scene. So I hung back, pacing and praying.

It would have been one thing to strike out three times in one game, but he had to get right back on the mound after drying his tears and keep his head in the game. His team still needed him. Only down by one run, they were still in the game.

I watched nervously as he wiped his tears, breathed deeply, and took the mound, and then watched in utter amazement as he proceeded to strike out the next three players.

His team came up for their final offensive opportunity, the bottom of the last inning. The game was within reach. There were two outs and two players on base, and then….

My son was up for the fourth time.

I absolutely could not sit in the bleachers. I got up again, paced behind them so he couldn’t see me and peeked at the field, afraid to see him strike out yet again.

Would he be able to overcome the first three failures at bat? Should I even expect that from a 4th-grade child? After all, he was just a little kid!

And then, in a Disney movie-like play, he took his last swing and hit the ball over the outfielder’s heads, with a walk-off winning hit that brought in the two on-base players.

At least they were forgotten by him. I will never forget them. Those tears and his ability to fight through the disappointment and self-doubt taught me a huge lesson as a mom.

It taught me in a very vivid way that my child is stronger than I think, that he or she is fully able to work through certain tough times without me trying to insert my self into the situation.

Of course, there are times when moms and dads need to be there to comfort and support, but there are also times when the best thing we can do for our kids is to love from a distance. Those times are the hardest for me as a mom because the biggest instinct in me is to run to my child and fix it with my words and my love.

There is a section in the Bible and a song by the Beatles that says there is a season for everything, a time for everything. This is an understanding that parents must grasp if they want to raise kids who are champions in life. There is a time to comfort, and a time to stand back.

There’s no recipe, no cut-and-dry guideline. As a parent, you have to access the situation and ask yourself: What does my child need to learn from this situation? What’s the best way for me to help them learn it?

My son absolutely learned a lesson that day: he was stronger than he realized, and you never give up, even after striking out three times in one game. That lesson was a building block for many more setbacks and failures to come. Today, he is a strong young man, and I know that if he’d not faced those types of building-block experiences, he would not be who he is now.

Are you committed to raising a champion? Do you need guidance or a plan to do so? I can help. I’m a parenting coach who’s committed to helping parents raise champions. Click here for your free 30-minute introductory coaching session.