You are here: Home / coaches / Here are 5 Types of Manipulation That Happen in Youth Sports–and in LIFE 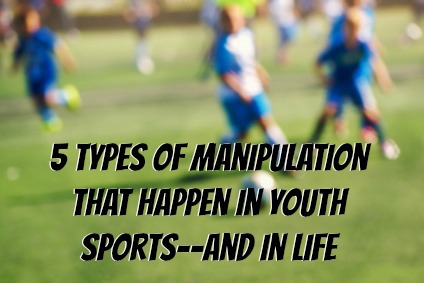 Let’s be honest. We are all guilty of manipulation in one way or another. Parents do it. Kids do it. Coaches do it. It’s very difficult to stop doing and, in fact, it almost seems like manipulation is a default mechanism in many relationships.

But healthy relationships cannot be driven by manipulation. Any community or culture that is striving to be healthy–any youth sports league or team–cannot be contaminated with manipulation.

If your goal as a parent or coach or league official is to have a healthy youth sports culture, then it’s important that you recognize and try to avoid using and being used by manipulation. I’d like to highlight 5 ways that people manipulate, taken from a book I recently read called Scary Close, by Donald Miller.

A person who manipulates as a scorekeeper makes life feel like a contest, with really no way to win. As Miller states, “Scorekeepers are in control of the scoreboard and frame it any way they want, but always in such a way that they’re winning…Scorekeepers keep tabs on whatever favors you owe them and call in those favors when they want to control you.”

In healthy relationships, people don’t keep score. There’s no tit for tat. As adults in youth sports who are striving for a healthy youth sports culture, this means that you don’t play this game with each other, or with your kids.

The judge personality believes in right and wrong, which is not the problem. The problem is that they believe they are the ones who decide who is right and who is wrong. They may even lord it over others to wield authority and power. “Right and wrong are less a moral code than they are a collar and leash they attach to others so they can lead them around.”

The judging personality has a hard time admitting when they are wrong. To be wrong is to give up their control and people who manipulate hate giving up control.

Perhaps you’ve seen the judging type in your spouse or your child’s coach. Or maybe even in yourself. Can you admit when you’re wrong? Are you willing to compromise and work with someone? Judgers have a hard time doing that.

Miller explains that “The false hero manipulates by leading people to believe they have something better to offer than they do. You might be dealing with a false hero when the future (or the team or the season) seems too good to be true.”

I saw this happen several times to my kids over the years of playing youth sports. Before the season, coaches would make all kinds of playing time and position promises. They would go on about how much they needed my son or daughter on the team. However, as the season wore on, it became apparent that that “false hero” talk was just a way to make my child feel important and needed and the promises were just a bunch of hype. My kids were never simply given anything they were “promised,” they had to work very hard for all of it. Which is as it should be.

As a high school coach, my husband tried to stay away from the false hero approach. He’d speak honestly with each athlete about their role on the team. It may not have always been easy for them to hear, but at least they knew what they were getting into and they also knew there was room for growth and improvement.

“Fearmongers rule by making people suffer the consequences of insubordination. The mantra of the Fearmonger is: If you don’t submit to me I’ll make your life a living hell.”

Perhaps you’ve seen coaches like this? They use fear to motivate players, instead of good coaching techniques. They yell and threaten and cuss at players, trying to push them into playing better. That approach may work for the moment, but in the long run, it does little to make disciplined leaders.

I think parents sometimes resort to the fearmonger technique too, with their kids, or even when they threaten coaches. Threatening others to get them to act the way we want is manipulation pure and simple and a sure way to kill relationships.

I’ve seen floppers in basketball and soccer. They are the ones who over-dramatize their injury or push in order to get the call they want.

In life, floppers over-dramatize and become the victim whenever it suits them and helps them achieve their goal. A flopper’s internal dialogue says, “If people hurt me they’re in my debit, and I can hold it over them to get what I want.”

Floppers make you feel bad and use that to get you to do what they want. Kids are really good at this, and so are parents. I would also call it using a “martyr complex” where you play the part of a martyr to make people feel bad for you and then they will do what you want.

To flip the coin, if you feel responsible for someone else’s pain, but you don’t know what you did, you’re most likely in a relationship with a flopper.

As you try to raise a child who is a champion, don’t forget how important their relationships with parents and coaches are. If you see yourself manipulating, the first step is to acknowledge it, work on correcting that behavior, and give yourself grace as you strive to let go of manipulative ways.

Would you like to raise kids that are strong enough to stand on their own? Confident enough to make good choices? Compassionate enough to really care about people? Independent enough to fight for themselves even when you’re not around?  I’d like to invite you to learn more about my 5-week coaching program:

Raising Champions: a 5-Week Blueprint for Raising Children Who are Strong, Compassionate, Trustworthy, and Full of Integrity.